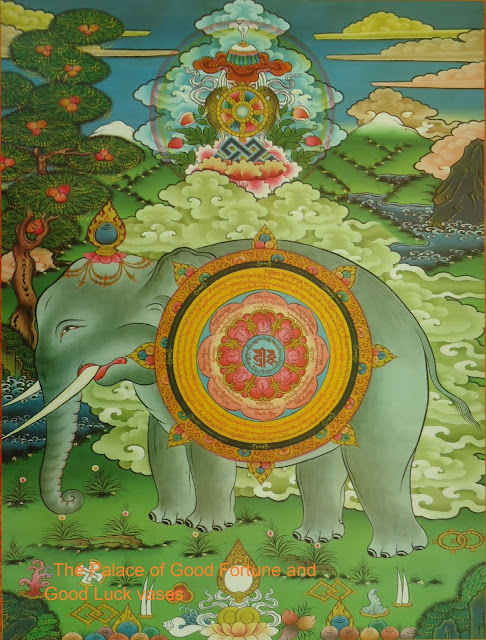 The above picture is known as Soe-nam Khorlo – the wheel of meritorious elephant. It is believed to generate power and wellbeing. It is also known as ‘yangdrup yidzhen drupai soe-nam khorlo’ meaning wealth accomplishment and wish fulfillment wheel of fortune.

According to a legend, when King Trisong Detsen of Tibet was not able to rule his kingdom in accordance with dharma, he requested Guru Rinpoche (Guru Padmasambhava) to grant a blessing that would pacify obstacles causing hindrance to his endeavor.  Guru Rinpoche then blessed King Trisong Detsen with oral transmission on Soe-nam Khorlo – the wheel of meritorious elephant. It was then hidden as Terma (a spiritual treasure).

Later, this terma was discovered and further propagated by terton (terma revealer) namely Ajo Palpo, Dre Sherab Bar and Nyalpa Nyima Sangge. Through the power of wheel of the meritorious elephant, one can accomplish all wishes and multiplies the power of influence, fame, wealth and other positive things in life. It enables one to conquer both self and the others.

However, according to some masters, the wheel of meritorious elephant is not meant to be kept in Choesham (alter), meaning it is not something that we take refuge in but to keep it in our places of business/work to generate positive influences.

In any case, elephant is a symbol of good luck. Elephant figurines if, kept on shelves are believed to shower wealth, fortune and longevity. In Hinduism, elephant is revered as Ganesha - the god of luck and is revered as an essential jewel that preserves human life.