In life, it is never too late to try anything new. I was feeling just right when I volunteered to undergo Integrated De-Suung Programme at Military Training Centre (MTC) in Tenchholing, Wangduephodrang. My only apprehension that time was having to leave my office for some time. Thanks to the Managing Director, BPC (a leader whom I respect and admire for his dedication & commitment to Tsa-Wa-Sum) for making it possible for me. The encouragement and support I received from him made me feel equipped and further boosted my determination.
10/10/2015, Saturday: We gathered at Changlingmithang parking for onward journey to MTC. Almost all 125 volunteers were present. The 17th Batch De-Suung trainees came from a variety of backgrounds comprising Hon’ble Members of Parliament, Drangpons, CEOs, Directors and Senior Officers. Transportation was arranged. By rule, it was not permitted to travel by personal car or dedicated pool vehicle. The probable reason may be, to group all volunteers as ‘DeSuup’ and not to carry forward one’s status. Also, to maintain 'uniformity' is a part and parcel of discipline. We joyfully traveled by 5 Nos. RBA buses in convoy. Looking at the well-organized journey, I was happy to see learning prospective even outside the training programme.
By noon, we arrived MTC and were received by the Commandant and a team of Officers. It was a grand reception with full of welcoming gestures. On the very same day, we began with military commands such as Threm (Alert), Dremtoen (Attention), Kayyjur (Stand at ease), Kertay (Relax), Nyidap Che (Double up), Cha-rup (Re-do), Youngter (Disperse) and of course briefings on Dos & Don’ts. When repeated ‘fall in’ were called to practice these commands and for other briefings, I felt little strange to see training getting started much before the formal inaugural session, due on 12/10/2015.  I didn’t know it back then but I know it now that, in the military, it is always preparation ahead.
11/10/2015, Sunday: In participation to ‘Move for Health’ we walked from Khuruthang in Punakha to Bajothang in Wangduephodrang. It was a joy to walk as a member of MTC along with Officers and others. As we walked we sang many songs, all incomplete and casual but were loud enough. In particular, I was happy that I did not miss to partake in ‘Move for Health’ and contribute to Health Trust Fund, so were my colleagues.
When training formally began on 12th October 2015, all of us became equal. We all started at rock bottom without status or position. Our energy level was high. However, as time passed, our enthusiasm gradually began to decline. A frequent ‘fall-in’ with long lectures/instructions was what we had to endure sometimes. While in fall-in, we were prohibited from smiling, laughing, chewing and talking to each other. We often failed to do it, as we were not used to it. Not everyone was bad but in military when one person fails it impacts the rest. Violation in any form was frowned upon and in fact punishable in various forms of discipline. Of course, punishments were not far from fun and we enjoyed doing it. It was desired that we stand with chin-up, chest-out, stomach-in and knee–tight. During fall-in, we used to stand quite meek and gentle but once inside our barrack and in absence of Instructors, everyone would have something to say and would go on talking non-stop like kids.
Days passed and time became scarcer. Time no longer ran at a regular pace. We endured a timing that was totally different from the routine we are habituated. In order to exhibit military discipline, we had to remain ourselves fully exposed to varying weather conditions and some of us even got sick. However, with not much trouble we got adapted to altered environments and the lack of usual daily conditions became bearable. Of course, there were something not all of us can get used to it so easily. Nevertheless, human body can adapt to altered conditions. Once it's over, we gain the confidence to overcome obstacles in life with the affirming knowledge that we survived this ordeal. The bottom line is harsher the hardship, stronger the solidarity. 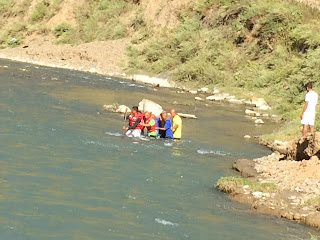 Our Instructors and us, we were all busy in our business. Today, as I remember them, I am thinking whether I have respected my Instructors adequately. At heart, I always have my respects for them. I must admit that, at some point I looked upon them as someone who only looked for imperfections in us, I did not realize that, they were trying their best to make us perfect. They are experienced professionals who know when to act how. They have trained people of all backgrounds, attitudes and characteristics on a continuing basis. Their rich experience with military background has instilled pride, enthusiasm and perseverance for their work.
This programme was also a good opportunity to meet old mates and of course a variety of others from outside normal secluded circle.  It is more than a joy to be acquainted with people from different backgrounds and develop a close bond with those, whom we ate, drank and withstood enduring moments together. Lectures by eminent personalities were not only educative and thought provoking but inspiring as well.
Two weeks came to an end. We had our Passing Out Parade on 24/10/2015. Now, I am a DeSuup - A guardian of peace and a life long member of De-Suung fraternity. With the spirit of volunteerism and the sense of responsibility that I gained from this programme,  I sincerely hope to live up to the expectations of His Majesty the King in serving our country at all times.
Though I have been a part of MTC for a brief period of time, I have collected a rather huge databank of vivid memories. No doubt it forms a chapter in my personal history. I will always look back with sensational sense of satisfaction and achievement. 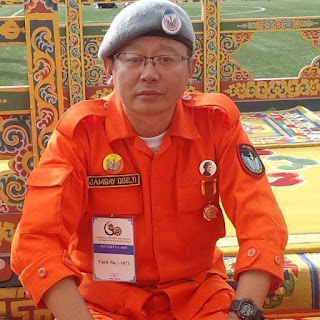 Now, as a volunteer, I feel myself closer to my surroundings, no matter where I am.
***