LIVING ON THE EDGE

We all live our lives in a different way. Some people live their lives in a way feeling satisfied to have lived. I met one such man while travelling along East-West National Highway some time ago. I tell this same story over and again not because I don’t have anything to talk about but it inspires me more every time I tell or write about it. Many travellers including myself stop for a while at Yotongla pass, which lies at about 3,400 meters above msl. It's clean air and impressive view is quite refreshing for the tired travelers but, if required to stay there for years, it would be a hostile experience and many of us would not dare to or would give up half way. At such altitude, there is no settlement around and the place remains covered with blankets of fog for most part of the year. It is deprived of activities, except for movement of vehicles.
Surprisingly, someone lived there for 13 years and continues living there with no complaint. A watchman in Bhutan Telecom, Bim Bahadur Rai, 52, a father of six, has beaten all those odds. His duty is to look after the repeater station at Yotongla pass and to operate diesel generator during power outages. What interested me to know more about him was the satisfaction in him. “I like my job and being here is not at all a problem,” he said with a warm gentle smile, adding he owes a lot to the company that employed him. He is committed to serve it to the best of his ability. A job satisfaction, loyalty and dedication! If every employee has this kind of satisfaction, work would be a real joy. Considering their children’s future, his family opted to stay away from him in Thimphu.“We remain separated so that my children get good education.” he said. A caring father and family man! To keep others connected through good telecommunication network, he remains separated from his family. We seldom think about people behind our comfort zone. He does not seem to complain about the shortfalls but continues to live behind our comfort, sacrificing his own. A selfless life! He does not want to take leave from his work to visit his family since it is more important for him to “encash” his leave at the end of the year. “At the moment, money is more important for me to support my family,” he said, adding his family also keeps their expectations low. He knows his priority well.
Before joining Bhutan Telecom, he served in armed forces for 23 years and seems to have grown both older and wiser. Above all, he looks contented both by his face and words. To me, anyone living behind someone else’s comfort zone by sacrificing their own, without complaint and at the same time fulfilling their duty towards their family are the real heroes. Mr. Bim Bahadur Rai is probably the only one, I know of. 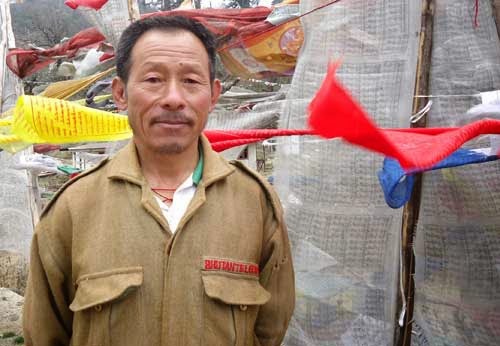 TREKKING FROM CHEMENA IN THIMPHU TO TASHI THONGMOM DZONG IN GASA 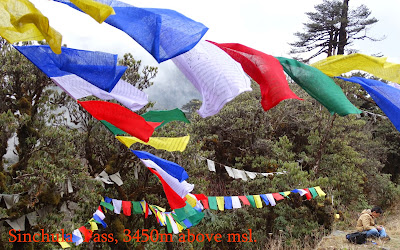 As we traveled, we raised prayer flags over Sinchula pass which is situated at about 3450 m above msl.  I nearly fell into a river while crossing Gairongchhu, it was there in Gairongchhu where my trekking stick lost its shoe forever. Further worse, we lost the trail and at  07:38 pm to be precise, we halted for night in a deep, dense jungle that we have never been before. We were totally unprepared. There was no food and water, not even a lighter to make fire. The night was dark as darkroom in a laboratory. We were hungry and tired. The thought of who might visit us at night and whether we would be lucky enough to see one another alive in the morning kept me awake. I hid my own fears and disguised my emotion though it was not so easy. Trying to hide my nervousness, I assured my friends that nothing would happen. Personally, I did not like the idea of not being myself at that point, but I had no option as it was my moral responsibility being the eldest in the group.
Finally, the longest night in my life gave way to dawn. All of us welcomed it with the same excitement in our hearts. We laughed at each other like fools. Perhaps, it was the only way to celebrate our safe night in the jungle. The other thing we enjoyed checking out at dawn was the marks left by insects on our bodies. How interesting it was that they didn’t spare even a small exposed part of our bodies! That was a small cost that we paid for being in their territory. We did not mind. Our destination was too big for insect bites to matter.
We moved on, and by around mid day, arrived at a place called Choeten Nyingpo. Situated towards the northern end in Punakha Dzongkhag, Choeten Nyingpo is a holy spot blessed by Lama Drukpa Kuenley - the Divine Madman. There is a monastery, which is the erstwhile winter residence of HH Gyalse Tenzin Rabgye (1638-1696).

To reach Choeten Nyingpo, one can trek along Sinchula trail from Chamena in Thimphu or go by road via Punakha. It would always be better to have a professional trek guide or at least a competent guide so that you don’t have to sleep in the jungle with all sorts of thoughts in your head. In case, you choose to go by road, it is about three hours journey from Thimphu to Punakha and it takes about 45 minutes from Punakha to Choeten Nyingpo. Uma, Aman resort, Phuntsho Pelri and other hotels / resorts are not far off. A meandering Mochhu river that flows right from Gasa and a magnificient view of Punakha Dzong are some of the best treats that await en route to Chorten Nyingpo.


The journey was tiring but being able to make it there and also to know about Choetean Nyingpo was all the more refreshing and felt blessed. We were overjoyed to know that the trail we trekked along is the same path trodden by great saints like Gyalse Tenzin Rabgye  and others about 318 years ago. With permission from Lopen, we camped ourselves near the very historic choeten. Unlike the previous night, there was nothing to worry about. There, I was myself and felt so happy to be that.
We woke up at dawn but unlike our first night in jungle, there was no excitement in our hearts because we went to bed with no worries. How interesting it is that, it takes ‘trouble’ to have ‘excitement’ and to feel excited.  It is true that, if not for the rock in its bed, the stream would have no song.
En route to Gasa, we passed by Hokatsho – a beautiful lake above Choetean Nyingpo. This lake is believed to have migrated from Tibet and the Mermaid there is said to be the consort of the protecting deity of Choeten Nyingpo. At Hokatsho, it is easy to get mesmerized by its shimmering and virgin beauty. 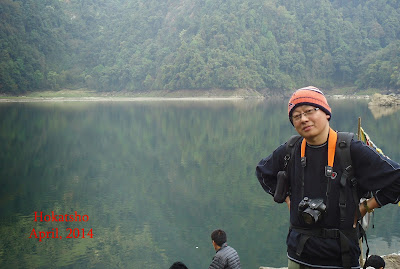 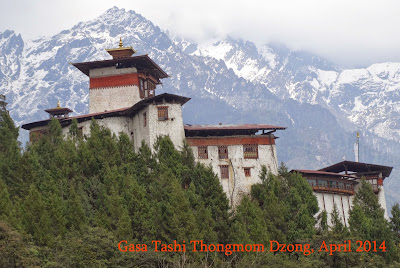 The next was Hangsi Goenpa. It is an abode of the goddess of longevityFinally, we arrived at Tashi Thongmom Dzong in Gasa. 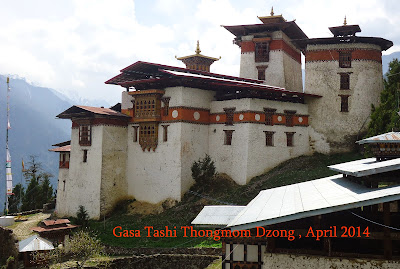 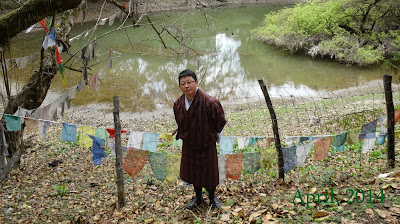 A lake near the entrance to the Dzong. It is said to have migrated from Tibet and is a soul lake of Gomola-the local Deity. 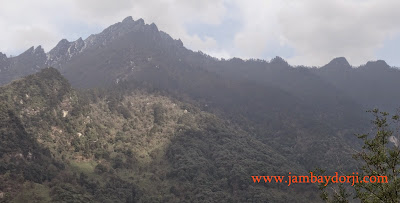 En route Gasa Dzong, we see these mountains with its peaks tilted towards one side. It signifies bowing down in respect towards Punakha Dzong where Shabdrung Rinpoche resided.
Posted by jambaydorji at 15:47:00 No comments: